I’ve been uploading GoPro videos and processing them, so I’ll get back to them after this post. I have been varying my route home to show some different options, and I’ve renewed my membership to MAPMYRIDE so I will be posting the routes along with the videos soon. 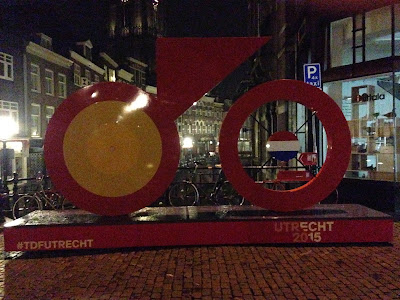 Two years ago I had the opportunity to spend a week in Utrecht in the Netherlands. My office was transitioning across the ocean and I was sent over to help set up the new operation, make sure everything made it over, etc.

I was on Canadian time, so when everyone else went home for the night I was wide awake with nothing to do.

So, natch, I rented a bike and cycled everywhere.

The bikes were, unsurprisingly, “Amsterdam” bikes, one gear, built in wheel brake and chain lock, built in lights and back rack, big wheels and enclosed chain. 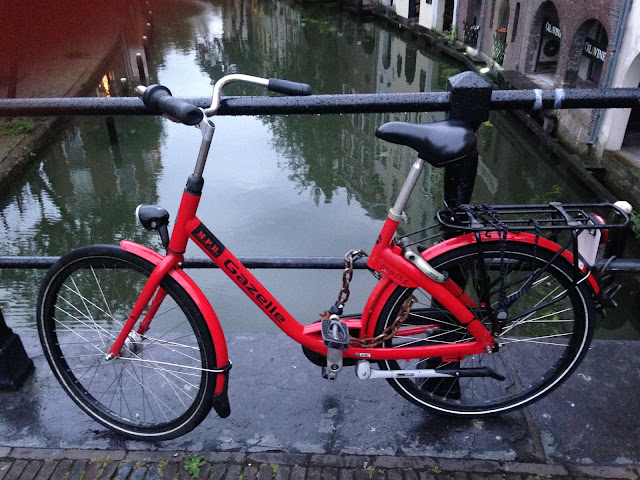 This was a “cruiser” bike, I did a lot of coasting around, as the Netherlands is rather flat. I averaged about 4-5 hours a night on the trails, criss-crossing the city and wandering out to the suburbs and the outskirts. And since I was working during the day, this was all done in the evening and during the night.

During the day I rode the bike to work and home and everywhere else, and since the Netherlands has a bike culture rather than a car culture, it was exceedingly safe. No one, and I mean NO ONE, wore a helmet, and no one used mirrors on their bikes. I have NEVER ridden without a helmet here, I rode everywhere there without a helmet.

It was pretty much cycling Nirvana.

There was the new signage: 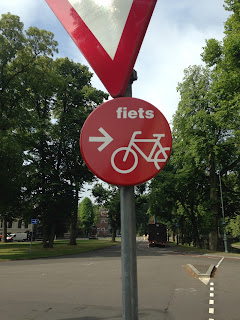 Bike trails of all different stripes, this one was along a line of trees that lined a divider between the roads in front of my hotel: 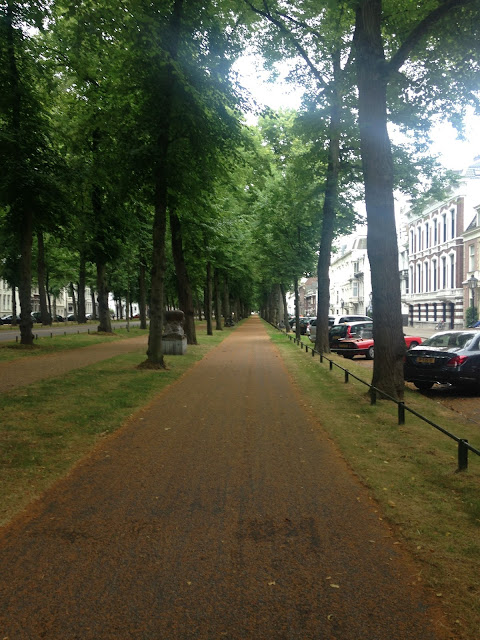 There were canals everywhere, and the trails criss crossed them, it was lovely: 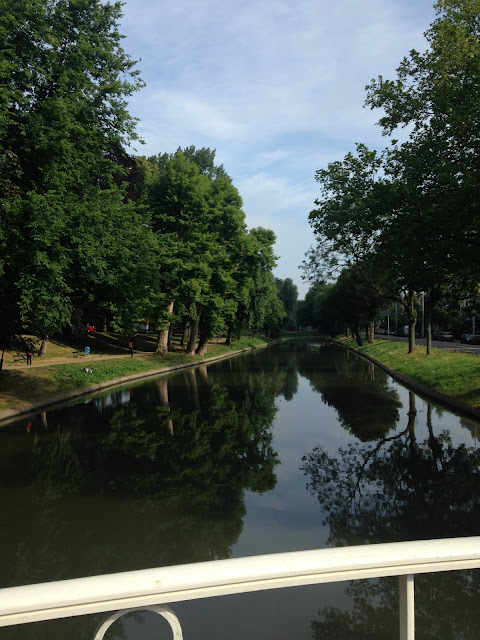 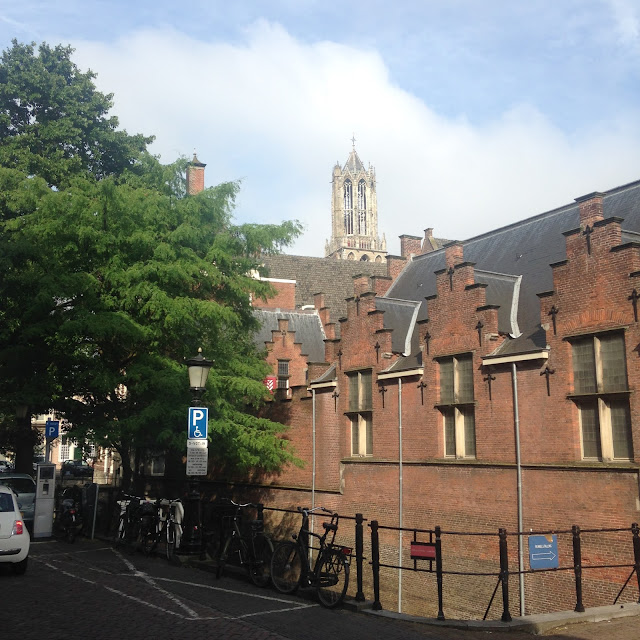 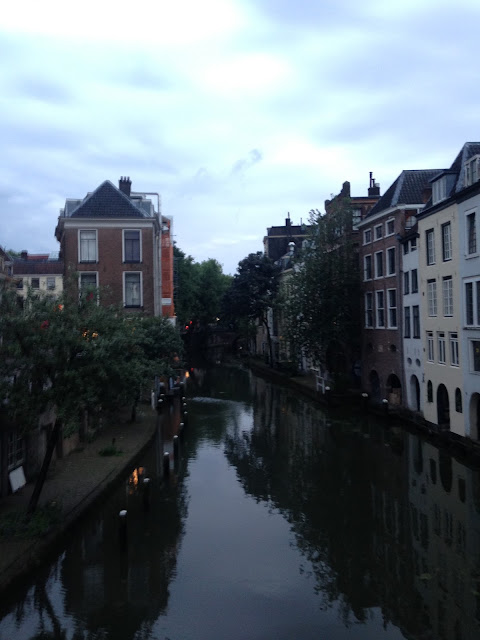 As well as brick and cobblestone streets, often long and narrow: 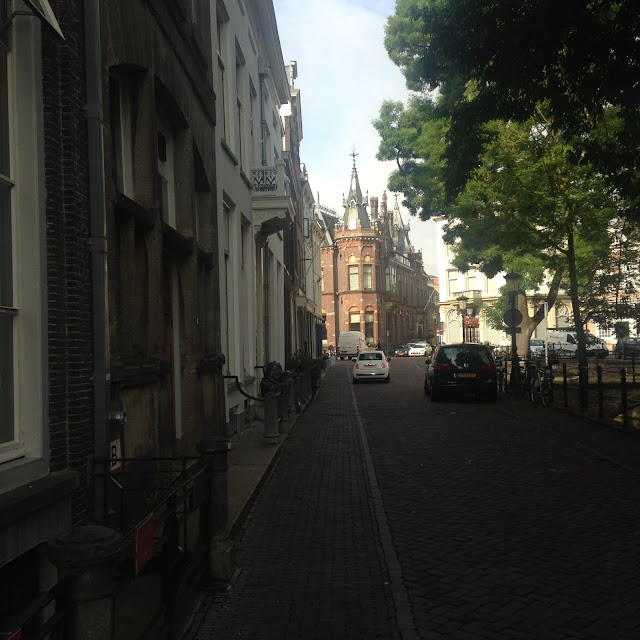 And a lot of bikes locked up by canals: 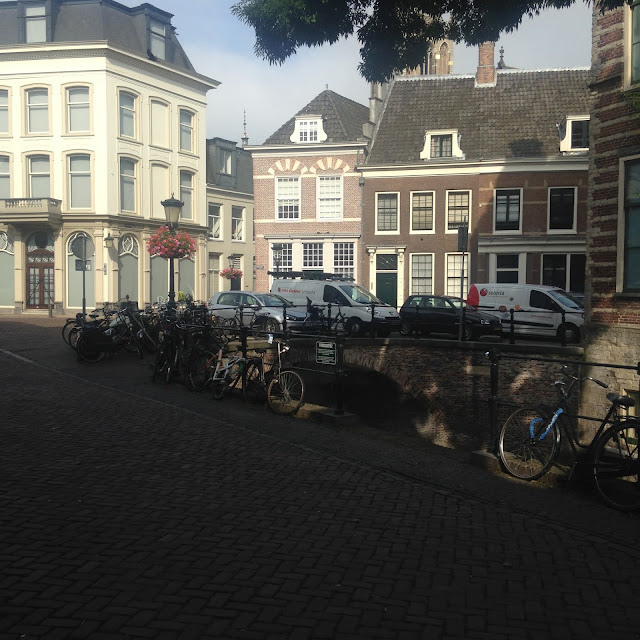 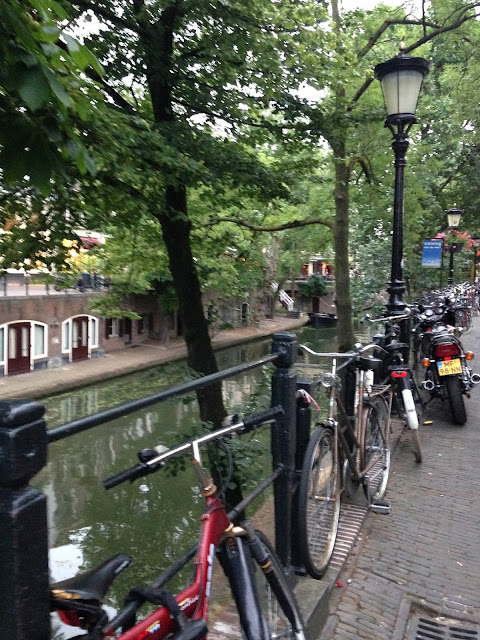 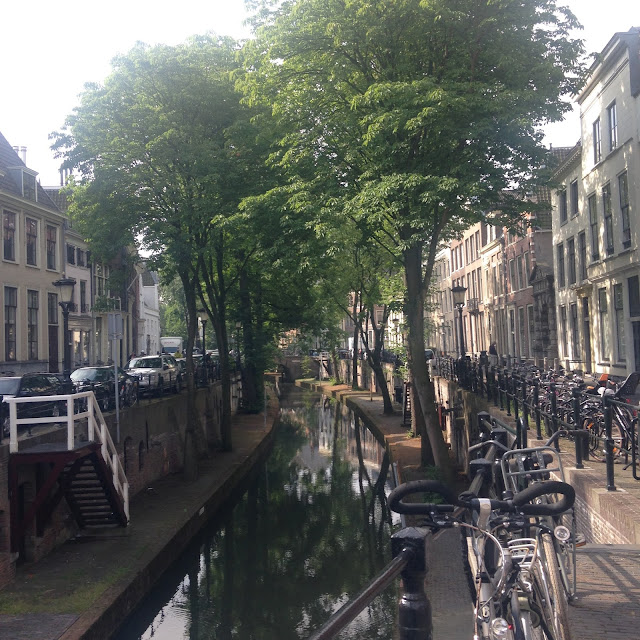 The sidewalks were very wide, allowing lots of room for cyclists and pedestrians to get around each other. 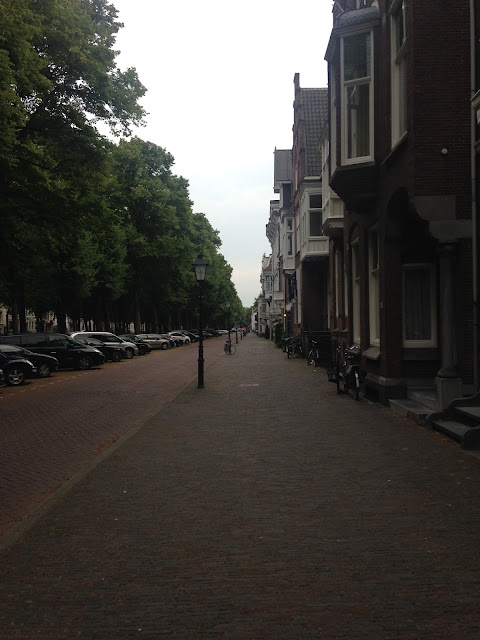 And then there were these, massive bike lock ups: 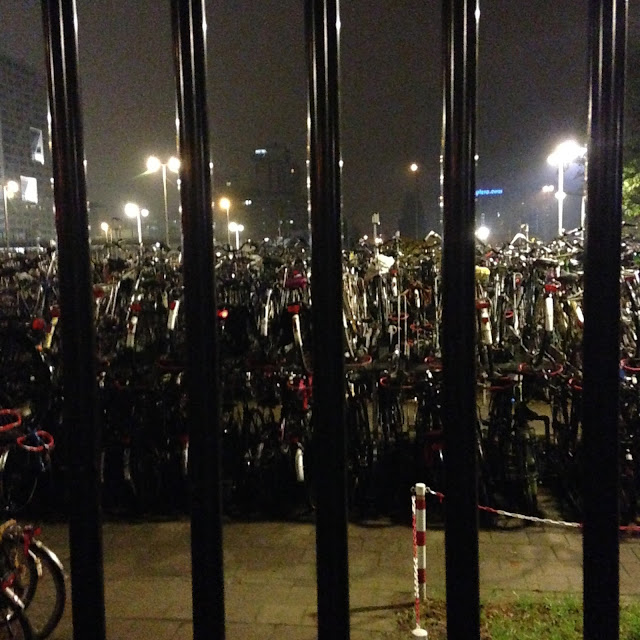 But perhaps my favorite thing, found while wheeling around at 2am one night: 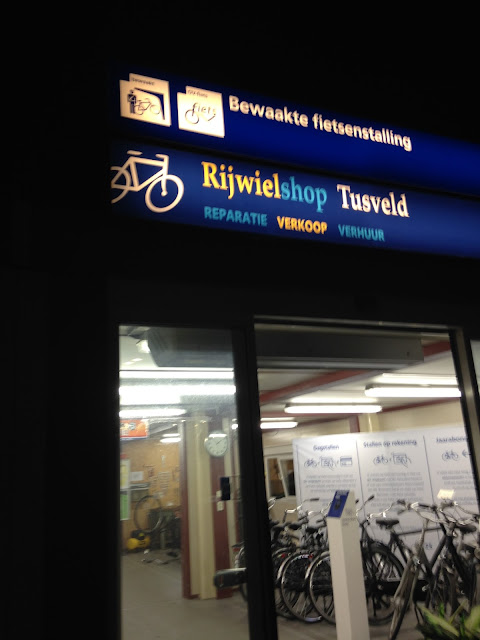 During the evening I decided to try some video while I was riding. As I rode a one speed cruiser mainly on trails and paved roads I spent a lot of time with either one hand on the handlebars or none. Eventually I decided to take some video with my IPhone 4 camera. All the video is at night and taken while riding and holding the phone in my hand.

Translation: it’s crappy, but it contrasts with the GoPro footage I’ve been taking, and they were fun to make.

These are all fairly short.

You can hear the city bells in the background, this is a downtown street by the canal around 10 at night. Lots of shops around, pretty touristy.

This one is fun, I like how the cycling infrastructure just cuts a swath through the city and everything accommodates it. Note how dark it is before I enter the tunnel…

These are kind of like those gag cards, “Toronto at Night” and it’s a field of black. It got pretty dark in places, and at one point when I heard the crickets chirping and looked around I realized I was miles away from the city and a storm was on the way in. Needless to say I boogied back to town.

There were several “main drags” in the city where people would accumulate, pubs, restaurants, clubs, etc., outside of the city center. This was one of them, the infrastructure for bikes is literally on every street, here I’m clipping along a bike path beside the main road, it’s fairly late so even the bike traffic is light.

This is probably the best lit video of the lot. One thing I didn’t capture was the mass of people leaving the pubs and clubs and restaurants at night and climbing on to the back of someone’s bike, riding side saddle on the back rack. Everyone did this at night, and surprisingly, despite the high spirits, I didn’t see one collision the entire time I was there.

It was an amazing trip, for a cyclist it was awesome.

On to the next video.

A few things interesting in this one.

The video starts when I am just above the 401 on Keele. This part of Keele is well travelled by large 18 wheeler trucks and other commercial vehicles. The speed limit is 60 kmh and there are four lanes (two in each direction).

For many, riding this stretch is the epitome of craaazzzyyyy.

Hopefully the video will help to show otherwise, LOL.

First, look ahead of me in the lane I’m riding in, and note the distance between the cars in front of me and the curb. There is more than enough space there for me and my bike.

Around 1:43 a large commercial truck passes me, but notice how he pulls out into the next lane to give me plenty of room. When vehicles switch to the left lane, pass you and switch back again this is an example of a motorist giving a cyclist what I call “respect” on the road. The fact that he switched back means he wanted to be in my lane, the fact that he goes well around me to get there means he is treating me with respect, like another vehicle on the road.

Unlike many of my brethren, I am far more concerned with small cars than I am with large commercial vehicles.

This is an excellent example of what happens when I cycle outside of rush hour. In this case I’m on the road at 9:30 or so, rush hour is winding down. When this happens, I essentially get a lane to myself on a major artery in the city.

I think that this, like bike trails and secondary or residential roads, represents the “hidden gold” of safe cycling. Major roads can be safe cycling option  at the right times, but this requires a shift in perspective.

At the 3 min mark I arrive on the stretch of Keele I like the most from a cycling perspective, from Calvington to Sheppard. It’s a long straight stretch beside the Park so there are no parked cars and few turn offs from the main road on the East side, so the cars go fast. However, it’s downhill, the view is lovely, and it’s a nice fast ride before the next major hill.

Around 7:30 or so I hit construction, and I’ve come to appreciate the beneficial impacts of construction on cycling. Yes, it does sometimes mean you have less room on the road, but it also slows down the ambient traffic, which can work to your advantage. So for example, by 7:40 I’m in a restricted lane, but the cars behind me wait until it opens up again to pass. I’ve been honked at before in that circumstance, so it’s nice to see that sometimes motorists are helpful.

Also, every time the camera dips down and to the left I’m checking my mirror, by my estimation I check about once every 10-15 seconds.

Around 11:38 or so I lane change to the left and turn on to the sidewalk. I normally minimize sidewalk riding, but in this case there was construction ahead that narrows the road and makes it unsafe to ride.

Around 15:57 I arrive at York and jump on to the trail network that runs around the school.

I took a different route home earlier this week, so I'll post the video from that later.

I’m taking a few moments to point out some things in the videos above.

I start in a park. Park riding is both easier and harder than it looks. Its easier as there are no cars, its harder as there are more people, and dogs.  I used to ring my bell when cycling through parks but now I prefer to just slow down and coast through and around people. When I ring my bell I have had people panic, move directly in front of me, I had a dog chase me when I sounded the bell too.

No matter what, slow is the rule on a trail, even a bike trail, when pedestrians are around.

Note that I’m three minutes in before I actually hit a road.

A few other highlights:

How I handle right turn lanes when they are empty: 5:30

How I handle left turns when there is a left turn lane: 9:00

The box “L” turn: 9:50
- A box “L” turn has you signaling left but initially going straight then making a very wide turn to allow the turning cars lots of room to go. It’s a bit counterintuitive when you first do it as you have to cycle straight for a bit before you turn, but its about being where the cars are not.

How you can use the space between vehicles, in this case buses, to your advantage:  10:02

How I handle off ramps to the highway (right hand side of middle lane): 17:00

I’ll document the next video soon.

It's been almost 2 years since I was posting regularly, lots of reasons why I stopped, but I needed a break.

I finally got around to buying a GoPro camera for my bike, and I've spent the last few weeks experimenting with different camera mounts and such. I've finally found a combination I like, mounted on the helmet. I may or may not grab a microphone as well, depending on how the acoustics work going forward.

I'm currently recording my daily commute to work, 18 km from downtown Toronto to Jane and Steeles. I will be posting those videos here as part of a "cycling safety tutorial" series. I've mused about how to put pointers and tips on the web for cycling, I've found many other online sources to give out dodgy advice based on my experience of road riding. I'm an experienced rider, so I'm indifferent to a lot of riding infrastructure, I agree that it is needed, particularly for new riders, but I'm also interested in knowing how to cycle where there is no infrastructure as well. I hope to address this in the videos.

Rather than film individual situations artificially, I decided to just record my regular commute for a few weeks and I can point out issues and suggestions as I ride.

After I have a few of these posted, I'm planning on hitting the city's many known and unknown bike paths to show some of what Toronto has to offer. Not just the main bike lanes in the city but also some of the lesser known trails. Toronto has a ton of cycling greenspace, free of cars and free of charge.

I'm of the somewhat unpopular opinion that Toronto should be a cycling destination, I think that it is an ideal city to cycle in, and hopefully showing some of the wider options will make it more interesting for potential visitors and residents that have been wanting to ride but don't know where.

I'm experimenting with Youtube right now to get the videos up, here is the first sample. I start in the park along the Beltline Trail just north of Eglinton near Dufferin. The video takes me through that park and up to Keele near Finch. At around the 9 min mark I make a left turn from Caledonia to Lawrence that is worth a look, it took me a while to turn with traffic at major intersections, but I wouldn't do it any other way now.